Magnet down your pants!? 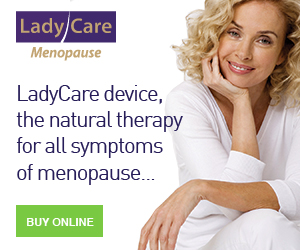 So I was contacted by Derek Raymond from Ladycare who asked me if I had ever used his product.
I’d heard of a magnet that women wore for PMS but not for menopause. To be honest I’d not paid it much notice.
A magnet, in your knickers?…..Hmmmm
So my intrigued was piqued (i like that word) and me being me went off for a bit of research.
According to Lady care research in a survey of 508 menopausal women.

Sounds too good to be true? Looking on forums and at reviews the response seems to be mixed. Some women love it and others don’t.
So how does it work?
“There are two divisions of the Automatic Nervous System (ANS), the Sympathetic Nervous system (SNS) and the Parasympathetic Nervous System (PNS). Symptoms such as sweating and anxiety, which are commonly associated with menopause, are under the control of the Sympathetic division, which is our body’s fight-flight stress reactor system. For example, when we perceive a threat, this is the system that causes our heart to beat faster and our pupils to dilate to allow more light for enhanced visual acuity and faster reactions.
In contrast, the Parasympathetic division (PNS) is responsible for REST and DIGESTION. This is the body’s repair and regulatory system and it tends to have the opposite effect to the SNS. For example, the SNS speeds the heart rate while the PNS slows it down. The two systems work together to regulate all of our organ systems.”
Ah so now i get it. The ladycare magnet works by balancing the two systems. Fantastic!
In research they used heart rate variability monitors to test this. Their ANS excess was reduced while their PNS activity was increased, thereby generating a healthier, balanced state of equilibrium between the two parts of the ANS.
Stress reduction
Reducing stress is a key part of how I help women with their menopause symptoms. It makes a HUGE difference to all women’s well-being but super important for menopausal women.
Ladycare have a product called Ladycare Plus which is 40% stronger and designed for women who feel the pressure of stress. I’ve been wearing this one for 6 weeks and I have noticed a difference. I defo felt calmer and reacted less to stress and pressure. It was more noticeable when I first started wearing it but maybe that’s because I have got used to it. I also realised a week ago that i need to wear it 24 hours to get the full benefits, I had been only wearing it during the day.
Because I’m on Bioindentical HRT I don’t have menopause symptoms any more apart from a bit of dryness (mucous membranes and skin) but I am under a lot of stress with the Nutrition course I’m on. I’m continuing to wear it for another few months all day everyday and see how I feel.

Magnet therapy isn’t a new thing.
Nikken have been using magnets for wellbeing for  years and have a huge amount of research behind them
Let’s not forget that the Earth is one big magnetic energy field.
If you are suffering from stress, pms or menopause symptoms and want to try something natural then I would give it a go.
ps. WARNING: your crotch may get stuck to metal objects like shopping trolley (like mine did)!
pps. don’t put your phone, ipad or bank cards near a magnet!
ppps I’ll never lose my keys again 😉

Reconnecting to our cycles
3rd February 2020

........
Subscribe below to receive your free guide on how to have a happier menopause

........
Subscribe below to get the menopause weight gain email/video series